3D Designer is one of the advanced filters in PD Howler and PD Artist that can be used to turn an image into a 3D landscape. It can also serve to build 3D logos and fancy elements for backgrounds of many types. 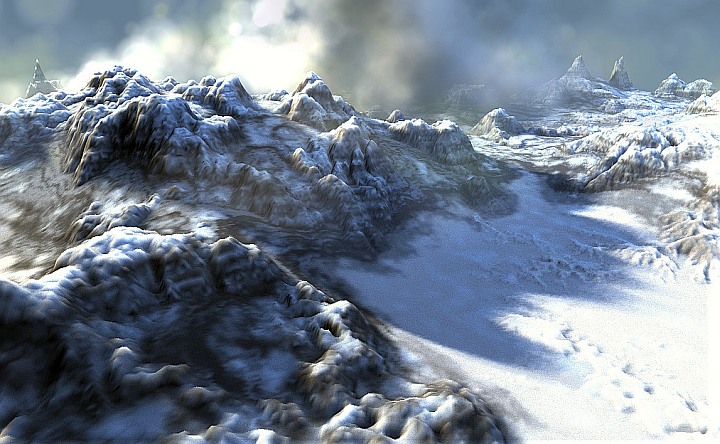 3D Desigenr starts with the current image, and uses it as an elevation map: The bright pixels of the image will reach high elevation, such as hills and mountain tops and alpine peaks. The dark parts of the image stay down low, such as valleys and deep canyons.

3D Designer lets you design the landscape, add erosion, sediment accumulation and slope-based (and height-based) coloring. It also renders with features like multiplicative or additive ambient occlusion (using the GPU), volumetric clouds for saved presets of Particle Modeler, with raytraced shadows, distant fog and ground fog. Use 5-level anti-aliasing for final rendering in seconds. Or, save your design as a series of images that represent key elements to be rendered in another program. You can save the height map (with erosion and sediments applied, 'baked' into it). You can save the erosion map separately, for example to add more erosion after some changes to it which can be lateral displacements for other erosion paths, or blurring for wider gullies and creeks or river paths. You can also export the light maps from the two light sources, so as to bake them into the texture map. This is great for games that have static lighting baked into the scene. You can also save and use other maps such as the 3D Depth map, or load that into the alpha channel in order to follow-up with such post effects like blurring or sharpening, blue tinting and haze saturation based on distance into the 3D scene. There are more things that can be stored, such as the selection masks for the height- and slope-dependent texturing and separation into low-elevation ground color (green grass by default), mid-range grey (rocks and mountain peaks), and top level white snow caps, which can all be further adjusted, blended and modified to create various interesting effects, displacements and compositions.

One of the key options is also to save the terrain into a 3D model's file, the Wavefront OBJ format. That feature includes optional use of u,v addresses, and vertex colors. Not all 3D programs have a use for it, but when you do, it's a great addition to what you can achieve with it.

To learn more about 3D Designer, start with version 9.5 of PD Howler - Purely Ballistic. 3D Designer started earlier, you'll find it in version 9.0-9.2 and earlier (see the starting image in this slideshow), even in version 8 or the very first incarnation in v7 too. But a major development started in version 9.5, and continued in the Steam-bound release of version 9.6.

See below for many tutorials, especially on our YouTube channel's playlist. Look for "the River Canyon tutorials".

Videos in our YouTube channel's Playlist: the River Canyon Series

One of the best places to learn how to use 3D Designer for many things you can do with it, is the playlist in our YouTube channel: The River Canyon tutorial series

Other tutorials may follow. Please bookmark this page or come back frequently.


You can find some starter info in 'Exploring 3D' under the Help files.


Here are examples of assets created and saved from 3D Designer:


Before 3D Designer: an elevation map, 512x512, greyscale image of Plasma noise, made Seamless too:

Here is a modified elevation map, the heightmap created in 3D Designer by adding erosion and sediments. Notice the gullies and creeks, erosion paths.

In fact, this is the Erosion map that 3D Designer created and applied. You can also create such erosion maps outside of 3D Designer, in Filter > Stylize...
You can reuse the erosion map in modified alterations: blur it, tweak it, shift it, add contrast etc... then combine it in subtractive mode, or to the contrary, additive mode to raise some ridges alogn these paths. You can do a lot of very different things with these gullies produced by erosion in a gradient of elevation maps: try using some as brush images, or distant lightning?

This is the texture map, colorized with the slope shader, also part of the 3D Designer. It takes into consideration the height (elevation) and the slope (how steep it is), in other words, the gradient (change of brightness). It initially assigns one of 3 base colors. There is also a separate filter (Filter > Stylize > Slope shader ) that can do the same and more.

You can easily start with such a texture map, to modify such maps into further details, and paint some added details too, by selecting the desired colors and filling with patterns or applying other filters. Below are two examples. In the second image, we used displacement techniques to add more random 'rocky' regions blending or mixing through the snow.

We also have the option to save two lightmaps. 3D Designer uses 2 point lights. One of them also casts shadows. The maps can later be baked into your texture map, for example.

Here are two straight renderings in 3D Designer: we also changed the background color to blue and enabled ambient occlusion in additive mode, adding a slight blueish haze to the scene. We also enabled volumetric clouds. Other options such as distant fog and elevation fog can also be controlled.

The saved height maps can be used with the texture maps, and other saved items, to be used in other modules of Project Dogwaffle, or exported to other programs.

Here is the same terrain rendered in Puppy Ray GPU:

Here is Windows 10's 3D Builder, taking a look at the exported OBJ file, combining with another too: the first was from an export without colors. The second has vertex colors, which 3D Builder can use too.

Here is anotehr scene re-created in Carrara: In this case we didn't import the exported OBJ. Instead, we reconstructed the terrain by importing the heightmap into the Terrain object and using texture map in the shader.

There are indeed many ways to use the images as heightmaps, erosion maps, texture maps, shadow maps and light maps and more.